To make lives into a chaotic nihilism of void

Torturing and killing 18,264,019 people and is responsible for the series having a high heinous bar

Eogo Ali Tainter (Pronounced E-oh-go Ah-lee Taint-er) is as of now the primary antagonist of the ongoing, and difficult to follow dark fantasy Insinmind, debuting officially from Balboa Press publication in April 17th, 2019 written by Allen Knox, this is a villain who is both male and female and is a powerful Insintation who is responsible for nearly or arguably all of the horrible events that are happening in the series, and is known in setting the five categories of sin that is not particularly the more mainstream seven deadly sins that many would know.

This part will be about the grammer on anything that may contradict Eogos pure evil status as publishing companies may have something written to be inaccurate as to what the villain is supposed to be as Balboa Press is known to have grammatical errors for novels and if there any grammer that may contradict Eogo please inform me the author of the series about it because this happens frequently with in the company.

More will be added about the matter of this subject

In one of the other images of Eogo within the novel, is him/her having a darkened body, showing eyes that have pupils and none of the cross on his ears are broken.

Eogos more known image is him/her as a white anthropomorphic goat with red clothing, triangle shades on his/her eyes and two upside down crosses on it's ear, with one on its right ear being broken. His/her eyes are dark orange that has no pupil or white cornea. The clothings are a red alb and has a necklace with 6 blue pearls and black goat emblem on the bottom.

In the older form of Eogo known as the Shadowy He/She goat, it is described to have some pleasure with the souls being damned into it's mouth, with the Shadowy he/she goat enjoying the fact that they being separated from the Almighty Flame.

Minimal description can be given about Eogos personality, mainly because he/she is never seen speaking, but it should be noted that this character showed no shred of remorse when shoving spiders in 4-year-old Zeths mouth, and torturing and killing the millions of civilians like as if they were nothing more than bugs to be sprayed. Committing heinous doings not only seemed like the breath of fresh air to him, but was of Eogos nihilistic treatment on disposing of life.

According to Allens twitter Eogo has a hatred for pure goods, but why he/she hates them is yet to known, with only this on how Eogo may want pure goods to be gone so that pure evil can reign supreme.

In the first few pages of Chapter 1: Formation of a Tyrant, there is a shadowy goat figure, shown to be a stealer of sparks from a flame, called the Almighty Flame, this alone causes the sparks to be misguided and to be swallowed by the goat figure fading into nothing. What these writings are supposed to depict is the character of Eogo Ali Tainter himself/herself, on the motives behind his/her actions being chaos and nihilism that involve primary key aspects being I. Power, II. Existance, III. Influence, IV. Them Us, Why and V. Heavy Burden. As some point possibly in the 1920s Caprin was present to have a part with Eogos work. Throughout history as an extremely powerful Insintation member, an

anthropomorphic cat-rat family called the Drastics are considered to be deal makers and slaves to Eogo Ali Tainter. The kind of deals the Drastic family makes with Eogo Ali Tainter is to fulfill their desires in what they badly want to accomplish with many wanting to have what they want on major levels of obsession. Around 1946, one member of the Drastic family being Jerico Walt Drastic who thought he was doing the right thing when doing this, let Eogo Ali Tainter torture and murder over eighteen million lives so that he can have a power to overthrow God. Many horrors were the roots of Eogos sinister doings, with Zeth Drastic who lost so much of his innocence became a horrible person for some time, murdering and ruining families just like the fully embraced heinous goat Eogo. However, it is unclear on rather Eogo is still around or not from 1959 and so on, but may still be active in some way. 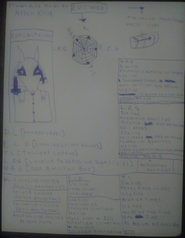 Getting onto topic on the statistics that I have made for not only Eogo but for Insinmind villains in general, this a stats bar that will give information on how evil they are by these five labels.

D.L (Danger level): This is about how dangerous they are, now the plan for 4th bar Danger Level is supposed to be a nightmare threat to the entirety of the series, in which Eogo belongs. The 4th danger level has no comic relief.

E.C.D (Enforced Crime Doings): This is about villains committing crimes that are enforced to be stopped by the law with villains making a number out of this.

T.C (Thought Carnal): This is about how their thoughts are on thinking evil thoughts, as someones thoughts may affect their choices especially when it comes to the circumstances on how much they think it.

N.A.B (Non Amoral Bar): The section informs the reader on how less amoral they are, with the first two bars being about amoral and the last two being about how non amoral a villain is.

This sub heading will be about other heinous acts done by Eogo within description that will also be shown in the novels as well.

External links to Videos and Sounds

It's advised that if you are going to listen to Eogos theme on beepbox you should hear it on laptop and not on phone/mobile as the quality may not be in the best condition there.

Retrieved from "https://pure-evil-wiki.fandom.com/wiki/Eogo_Ali_Tainter?oldid=10321"
Community content is available under CC-BY-SA unless otherwise noted.